The AUA (American Urological Association) recently updated its guidelines (2017) for managing renal masses and those subsequently diagnosed as RCC.

Guidelines were previously updated in 2009.

All recommendations are Grade B-C.

In 2017, the AJCC (American Joint Committee on Cancer) released the 8th edition of its Cancer Staging Manual, with major updates to several cancers. TNM Staging for RCC has small but important changes to T3a disease:

Staging is otherwise unchanged for other T stages as well as N and M staging.

*Level of evidence II: “The available evidence is obtained from at least one large, well-designed, and well-conducted study in appropriate patient populations and with appropriate endpoints and with external validation.”

May be most high-yield for small masses
MDCalc Editorial Team

Unlike for many other malignancies, biopsy of renal masses to confirm malignant pathology has historically had limited application. The traditional paradigm was that renal mass biopsy (RMB) should be reserved for cases of metastatic and/or unresectable disease for the purpose of guiding chemotherapy. In recent years, with improved safety and accuracy of percutaneous image-guided techniques, more groups are advocating for expanding indications for renal biopsy. But is RMB necessary for all renal masses?

If an incidental mass is found on renal ultrasound or IV pyelogram, CT abdomen w/o and w/IV contrast is recommended to further evaluate (provided renal function is adequate).

When should MRI be obtained for staging?
MDCalc Editorial Team

If any of the following is present, MRI should be obtained:

If none of the above, CT is the preferred study.

Urologic surgeons have been well ahead of the curve in adopting minimally invasive surgery, including use of the robot, even for kidney transplantation in recent years. The next frontier? An entirely retroperitoneal approach to nephrectomy, a potentially attractive option for patients with tumors traditionally inaccessible except via open surgery.

“It’s a really useful tool for a kidney surgeon, once you learn it ...there are certain patients with really hostile abdomens where it’s good, or these really posterior tumors—if you’re transperitoneal, you have to dissect that renal away, you have to flip the entire kidney forward, whereas the other way, it’s sitting right in front of you. Once you figure it out, it’s a really great technique, but it’s a little bit tough to learn, and it’s tough to teach.” — Alexander Kutikov, MD, Fox Chase Cancer Center, interview with MDCalc 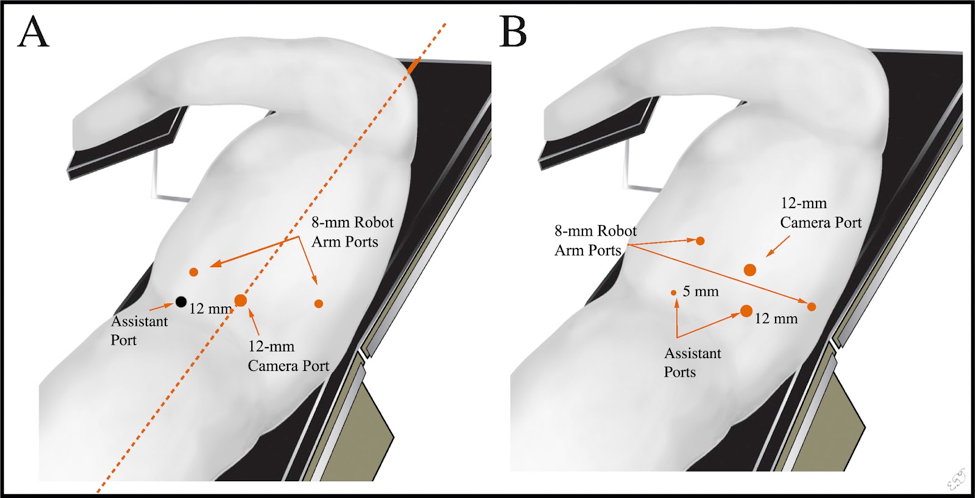 A routine metastatic workup for RCC should include the following:

When is it indicated?
MDCalc Editorial Team

A bone scan to evaluate for RCC mets is indicated if any of the following is present:

The National Comprehensive Cancer Network (NCCN) and the American Urological Society (AUA) have developed similar recommendations for follow-up in patients undergoing active surveillance or intervention for RCC. We've summarized these recommendations, highlighting the few differences, as a quick reference that can be used at the point of care.

When is it indicated?
MDCalc Editorial Team

CT chest to evaluate for RCC mets should be obtained if:

What do the guidelines say?
MDCalc Editorial Team

Biopsy should be performed for:

How should RCC be staged and graded?
MDCalc Editorial Team

The AUA recommends TNM for staging and Fuhrman Nuclear Grade for grading.

Yes, and perhaps better than the RENAL Score (identifies >20% postoperative decline in eGFR with AUC 0.94, vs. 0.80 for RENAL Score).

Does adjuvant therapy with sunitinib or sorafenib improve disease-free survival in patients with high-risk (≥T3 or node-positive) clear cell RCC?

What are perioperative and long-term survival rates in patients undergoing radical nephrectomy and caval thrombectomy for RCC with IVC thrombus?

In patients with metastatic clear cell RCC, does alternating pazopanib/everolimus improve survival and/or quality of life as compared with pazopanib monotherapy?

Have feedback about this page?
RCC Calculator Toolkit