Several validated scores exist for predicting bleeding risk in atrial fibrillation patients on anticoagulation, but which one is most widely used clinically? The HAS-BLED Score (Pisters 2010) is the most commonly used score according to MDCalc analytics, with usage of the HEMORR₂HAGES Score (Gage 2006) and the ATRIA Bleeding Risk Score (Fang 2011) accounting for a minority of total usage.

Note this is aggregate observational data and is not intended to be prescriptive for which score is the best or should be used in every scenario. See our forthcoming Practice Pearls in this space for an analysis of the evidence comparing these scores. 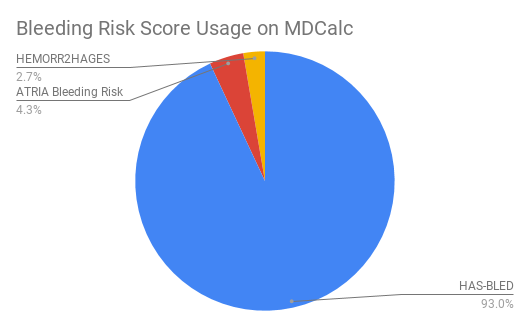 Atrial fibrillation and paradoxical embolus via patient foramen ovale (PFO) are each widely known stroke etiologies. In patients who have both, it can be difficult to determine the chance that a stroke is attributable to the PFO (and therefore could be considered for PFO closure). The Risk of Paradoxical Embolism (RoPE) Score is a validated score that determines PFO-attributable risk.

[The RoPE Score] is meant to be for people who have no other compelling grade I cause for stroke in whom a PFO is found.

If you have atrial fibrillation, for example, it doesn’t protect you from having a paradoxical embolus, which is the argument that a lot of the aggressive PFO guys make.

If you have 90% carotid stenosis, you could still have atrial fibrillation as the cause of your stroke.

It is possible to have more than one mechanism, but the RoPE study and score was developed from within a combined cohort of different studies of cryptogenic stroke patients.

They all had slightly different definitions, but basically it’s all patients without high grade atherosclerotic stenoses and without afib and without mechanical valves and without lacunar strokes and without lots of other things, and you’re just left not knowing what it is.

CASTLE-AF was a randomized, open-label, multicenter trial evaluating differences in mortality and morbidity by catheter ablation vs medical therapy in patients with a history of symptomatic paroxysmal or permanent atrial fibrillation and concomitant heart failure with an ejection fraction <35%.

Patients were randomized to receive catheter ablation or guideline-recommended medical therapy for afib, with recommendations to maintain sinus rhythm.

The trial demonstrated fewer incidences of death from any cause or hospitalization for worsening heart failure (primary endpoint) in the ablation group, 51 (28.5%) vs. 82 (44.6%) patients, log-rank test <0.01.

The NNT to prevent all-cause death was 9, with the greatest mortality benefit seen at 3 years.

This trial highlights the benefit of maintaining sinus rhythm in HF and AF. At 60 months, the catheter ablation group had remained in sinus rhythm longer compared to medical therapy (63.1% vs 21%, p<0.01); with the caveat recurrence of afib were recommended for repeat ablation during scheduled follow up.

In addition to meeting the primary endpoint, the ablation group exhibited lower incidence of cardiovascular death.

The trial adds to growing evidence of efficacy of ablation over medication alone, and importantly, the mortality benefit gained. Criticisms include lack of blinding, and that the sinus rhythm was recommended over rate control in the medication alone group.

A recent study in the International Journal of Clinical Practice showed differences in uptake in the two most popular stroke risk assessment scores, CHADS₂ and CHA₂DS₂VASc, on MDCalc.

Habboushe J, Altman C, Lip GYH. Time trends in use of the CHADS and CHA DS VASc scores, and the geographical and specialty uptake of these scores from a popular online clinical decision tool and medical reference. Int J Clin Pract. 2018;:e13280.

A look at the evidence base
theNNT

“In 2012, the European Society of Cardiology (ESC) guidelines recommended a clinical practice shift, to initially focus on the identification of “truly low risk” patients who do not need any antithrombotic therapy. These low risk patients are those CHA₂DS₂VASc Score of 0 (male) or 1 (female). Subsequently, the next step is to offer effective stroke prevention (i.e., oral anticoagulation) to those with ≥1 additional stroke risk factors.” [emphasis added]

A new study in Annals of Internal Medicine finds that stroke risk is dynamic and recommends re-evaluating annually, using the CHA2DS2VASc Score.

In the first year after being deemed low risk, 16% of patients developed an additional risk factor making them eligible for treatment. Follow up was 3 years, and over ⅓ of patients total had increased risk over that period.

Is rivaroxaban or warfarin better?
theNNT

In the subset of atrial fibrillation patients who undergo catheter ablation or cardioversion to treat the disease, how effective is rivaroxaban (as compared to warfarin)?

TheNNT group gives rivaroxaban a color rating of yellow (“unclear if benefits”) for anticoagulation in patients undergoing catheter ablation or cardioversion, based on a 2015 meta-analysis showing a large NNT. While the benefit is statistically significant, its clinical significance is still not definitive according to these data.

Note that rivaroxaban has recently been shown to be beneficial for secondary prevention of cardiovascular events (including stroke) in a different population (patients with stable atherosclerotic vascular disease).

Rivaroxaban vs. Warfarin for Anticoagulation in Patients with Atrial Fibrillation Undergoing Ablation and Cardioversion

Have feedback about this page?
Afib and Stroke Calculator Toolkit