Use cross-sectional imaging (CT or MRI, not ultrasound).

Patients with renal mass on cross-sectional imaging (CT or MRI).

The RENAL Nephrometry Score was developed as a standardized system to objectify reporting of critical anatomical features of a renal mass.

Why did you develop the RENAL Nephrometry Score? Was there a clinical experience or a patient encounter that inspired you to create it?
There was a lot of literature comparing series of nephron-sparing surgeries from different institutions, and complication rates and surgeon experience varied. It became obvious that what somebody considered a tumor amenable to partial nephrectomy at one institution might be considered unresectable via nephron-sparing surgery at another institution. There was no meaningful way to compare series or standardize reporting, so Rob Uzzo and I sat down (I was a fellow at the time) and created this score that we thought would be a simple and effective way of standardizing reporting in the literature. It really got a lot of traction quite quickly.

How does the RENAL Nephrometry Score compare to other similar grading systems such as PADUA and C-Index?
The PADUA score came out around the same time, about a few months later, and those investigators wrote that they had been working on a similar system, and they saw ours and decided to publish theirs. They’re very, very similar; it’s hard to know if one is superior because they’re almost identical.

The C-Index is from the Cleveland Clinic and is meant to quantify anatomic complexities in a slightly different way. Again, it’s hard to say whether it’s better or worse, but what we tried to do is make a very simple score. I think it has the most references out there of any other anatomic grading system, and I think the simplicity of it is what really caught on.

The tools that you have on your website, where you’ve operationalized them to be used at the point of care, are very important. We’ve done a little bit of that at Fox Chase Cancer Center with cancernomograms.com as well. It helps to objectify some of the decision-making instead of only using clinical gestalt. You can use these predictive models as a sort of jumping-off point for some hard decisions.

The important thing to know in interpreting these tools is that none of them have perfect predictive ability. A lot of them are in the 70th percentile or lower. 50th percentile is a coin flip, so being halfway between a coin flip and a perfect prediction is still not something that you can completely rely on in a clinical setting. Again, the number you get is a jumping-off point. At an extreme, it’s very useful. Obviously when they’re not externally validated, they have to be used with caution, and a lot of times you’ll see a patient who is very different from the patients used to derive the predictive model, so I think all those little nuances are really important in these models.

Do you know of any cases where the RENAL Nephrometry Score has been misused or misapplied?
You know, I think most clinicians realize that these are just a general guide. There are some patients that ask, “What are my chances?” These are useful to show them what we do know and what the predictive abilities are, but they’re not perfect, and in the absence of a perfect predictive model, you still have to rely on clinical judgment and mutual decision-making. It’s important to make the patient an active participant in their care, and to understand that there’s some uncertainty involved. Communication is important, so whatever path they choose, they should understand that there are potential pitfalls on that path.

There’s a nomogram you developed that incorporates the score and predicts the likelihood of high-grade malignancy. How do you use that clinically?
The score was meant to be a standardized descriptor of these masses, and to communicate the relationship of the tumor to the rest of the kidney, we and other groups explored what other information the score communicates. One thing that has been described in the past is that the deeper the tumor is, the more central it is, the closer to the collecting system it is, and the more likely it is to be high grade. We created that nomogram to harness the anatomic complexity score (the RENAL Nephrometry Score), to see its predictive ability in predicting a high grade tumor.

It’s not perfect, and you can question whether it’s clinically always important, but it does have significant predictive ability in differentiating high grade and low grade tumors. The closer it is to the business end of renal structures, the more likely it is to be aggressive. Sometimes you can hang some important clinical decisions on that.

It must be useful to have that number to tell the patient.
There’s another paper from our group showing that the higher the complexity of the tumor, the higher the complication rate. That really plays a role in clinical practice when you see a high-complexity tumor. Especially in an elderly frail patient who may not be able to tolerate any sort of complication—you can choose a radical nephrectomy, which is a simpler operation, where you don’t expose the patient to these higher complication rates. And especially for patients who have a normal contralateral kidney, the decision to do a radical versus a partial nephrectomy is really painted by the anatomic complexity and the score, the function of the contralateral kidney, and the frailty of the patient. It seems obvious, but when you put numbers on it, it sort of drives the point home. The more complex the mass, the higher complication rate, and you can use that in making decisions.

It seems like the score has a few different potential uses: a reporting system like BIRADS, an evidence-based aid for shared decisionmaking, a component of research protocols like RECIST, a tool for surgical planning. What do you think are the most useful applications of the score?

It depends on your practice and what kind of patients you’re selecting for, what kind of surgery and complications, but it’s the common denominator. It really normalizes all the other data to understand beyond what’s happening in one’s practice, and that’s number one. In reality, when I look at a tumor, my review of the films tells me everything I need to know. But when I’m on the phone with a referring physician and I don’t see the images but they tell me the Nephrometry Score, that gives me a lot of information. It’s really first and foremost a communication tool. It’s hard to say I go by the numbers every time. One has to realize that especially with the Nephrometry sum, it only communicates a certain amount of information, because you can have a score of 7 several different ways, and the complexity of various 7s is very different. But each component tells you a part of the story. Not as much as the imaging does, but it can tell you what the tumor is doing, how it’s sitting on the kidney, and where it sits in relation to other structures. So especially with a good data set, it helps to be able to quantitate this.

Alexander Kutikov, MD, is an attending surgeon and professor of urologic oncology at Fox Chase Cancer Center in Philadelphia. He is an active investigator in kidney, prostate, bladder, and adrenal disease. Dr. Kutikov is a co-founder of VisibleHealth, Inc., a digital health company with flagship products that include the app suite drawMD and Ureteral/Endoscopic Stent Trackers.

Are you Dr. Alexander Kutikov? Send us a message to review your photo and bio, and find out how to submit Creator Insights!
MDCalc loves calculator creators – researchers who, through intelligent and often complex methods, discover tools that describe scientific facts that can then be applied in practice. These are real scientific discoveries about the nature of the human body, which can be invaluable to physicians taking care of patients. 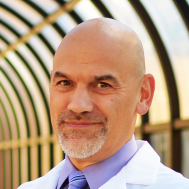 Robert Uzzo, MD, is chair of surgical oncology at Fox Chase Cancer Center in Philadephia and professor of surgery at Temple University Health System. His clinical interests include minimally invasive urological oncology and renal malignancies. Dr. Uzzo has has authored over 300 peer-reviewed articles and chapters that have been cited over 3,500 times.

Are you Dr. Robert Uzzo? Send us a message to review your photo and bio, and find out how to submit Creator Insights!
MDCalc loves calculator creators – researchers who, through intelligent and often complex methods, discover tools that describe scientific facts that can then be applied in practice. These are real scientific discoveries about the nature of the human body, which can be invaluable to physicians taking care of patients.
Content Contributors
Related Calcs
Have feedback about this calculator?