The NIH Stroke Scale has many caveats buried within it. If your patient has prior known neurologic deficits e.g. prior weakness, hemi- or quadriplegia, blindness, etc. or is intubated, has a language barrier, etc., it becomes especially complicated. In those cases, consult the NIH Stroke Scale website. MDCalc's version is an attempt to clarify many of these confusing caveats, but cannot and should not be substituted for the official protocol.

The NIHSS can help physicians quantify the severity of a stroke in the acute setting.

There are nearly 800,000 cases of acute stroke in the United States every year, with 140,000 associated deaths (5th leading cause of death in Americans).

The NIHSS can help physicians determine the severity of a stroke, predict clinical outcomes. 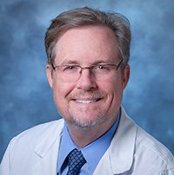 What pearls, pitfalls and/or tips do you have for users of the NIH stroke scale? Are there cases in which it has been applied, interpreted, or used inappropriately?
The point of the NIHSS is to rate groups of patients, not individuals. This is fundamental and important for users to keep in mind. A lot of the scoring rules are counterintuitive if you’re a good neurologist. It’s not true that you have to be a neurologist in order to use the NIHSS. You have to use the scoring rules. Neurologists actually do the worst. ED physicians do the best, because they follow the rules. Neurologists think they’re smarter than the scale, so they don’t follow the scoring rules. The scoring rules are there to assure reproducibility, across users of all different backgrounds, whether it’s a neuro nurse, a neurologist, or an ED physician.

The government is now looking at outcomes based on stroke severity, so all of a sudden, this scale that we invented for research has become essential for hospitals to get reimbursed, because the more severe the stroke is, the more the reimbursement. The stroke scale has grown so far beyond its original purpose, which is fine, but you have to understand where it came from and how to use it correctly.

What recommendations do you have for health care providers once they have applied the NIH stroke scale?
Higher stroke scale scores indicate higher severity and poorer prognosis, but the stroke scale is NOT a guide to picking patients for tPA. tPA should be used regardless of severity.

How does the NIHSS compare to other stroke assessments?
At the time the NIHSS was developed, there were a dozen other scales, and they’re all roughly the same. There’s only so many ways to put numbers on the neuro exam. But the NIHSS is the most widely used, because of its use in the tPA trial, and there are training videos available. It was adopted because it happened to be the scale that was used in the tPA trial. And since the tPA trial was the first positive stroke [treatment] study, everybody started using the NIHSS. So there are over 800,000 people worldwide who have been certified with those videos. It’s not inherently better than any other scale, but it’s used, and everybody knows it.

Why not?
I think it’s just inertia. I think if people got familiar with the modified NIHSS, they would use it, but it was never part of a successful clinical trial, so it didn’t have the cachet of the original scale.

Patrick D. Lyden, MD is chair of the Department of Neurology, Director of the Stroke Program and holds the Carmen and Louis Warschaw Chair in Neurology at Cedars-Sinai. Previously, he was a professor and vice chairman for clinical neurology at UCSD and served as the Clinical Chief of Neurology and Director of the Stroke Center at UCSD Medical Center. Dr. Lyden has published more than 200 journal articles and abstracts and edited a textbook on stroke intervention.

Are you Dr. Patrick D. Lyden? Send us a message to review your photo and bio, and find out how to submit Creator Insights!
MDCalc loves calculator creators – researchers who, through intelligent and often complex methods, discover tools that describe scientific facts that can then be applied in practice. These are real scientific discoveries about the nature of the human body, which can be invaluable to physicians taking care of patients.
Content Contributors
Related Calcs
Have feedback about this calculator?

Get up to 10 hours of stroke CME