Predicts need for massive transfusion in trauma patients.
When to Use
Pearls/Pitfalls
Why Use

Trauma patients for whom massive transfusion is being considered. 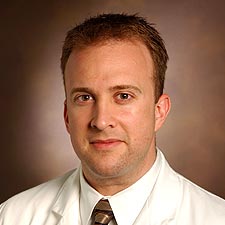 What recommendations do you have for doctors once they have applied the ABC Score? Are there any adjustments or updates you would make to the score based on new data or practice changes?

Once adopted or incorporated into a prehospital or ED massive transfusion protocol, one can evaluate for impact on of delivery of products and for potential wastage. While it was developed to determine prediction of patients who would receive 10 units of RBCs, many major transfusions involve less than 10 units in the current 1:1:1 paradigm where we get hemostasis much sooner.

What we have done is look at predicting those who receive one cooler of products (6 RBCs, 6 plasma, "6-pack" platelets), rather than 10 units of RBCs. At the end of the day, it's about having the products your patient needs at the bedside when you need them and not waiting for them. You can always send the products back if you don't end up needing/using them (and should in an expeditious manner).

Why did you develop the ABC Score? Was there a particular clinical experience or patient encounter that inspired you to create this tool for clinicians?

We developed the ABC Score to help to remind physicians to activate their massive transfusion protocol (MTP) quicker. We saw at our hospital that delays in activation (activating it as little as 10-15 later) were associated with an almost 3-fold increase in mortality. More recently, we have shown that every minute (every 60 seconds!) delay in activating your MTP after patient arrival is associated with a 5% increase likelihood of mortality, as is every minute delay in receiving the coolers once activated.

What pearls, pitfalls and/or tips do you have for users of the ABC Score? Do you know of cases when it has been applied, interpreted, or used inappropriately?

The biggest pitfall or inappropriate use is in settings where your ED/trauma team does not use FAST/ultrasound (or isn't very facile with FAST). In the initial development dataset and in subsequent validation datasets, the most powerful predictor of the four individual components was positive FAST. So, if you are going to use the ABC, you should be doing FAST on every patient (and doing them well).

In a multi-center validation study, the ABC Score demonstrated a negative predictive value of over 95%, meaning that the score missed less than 5% of patients who ultimately received a massive transfusion. So, it will get products to the bedside when you need them (even though you may not end up using them all), but will only miss bringing the products to the bedside in a small number of cases.

When looking at your program and seeing that not all patients predicted are getting to 10 units of RBCs shouldn't be viewed as a failure. The question is, is did they get/need multiple products in a short time frame after being predicted to need them? Also, if you are seeing true product waste (rather than blood bank tech time and MTP cooler "runner" time wastage), then one should look at your product handling and timely return of products. You should always be able to send products back in a timely fashion in patients that do not end up needing all or even some of the products.

We have recently shown that a prehospital ABC Score is just as powerful at predicting not only need for but also emergency surgery. Our helicopter program uses the ABC Score to begin hanging whole blood, RBCs, and/or plasma in the prehospital setting and serves as for our in-hospital MTP.

How do you use the ABC Score in your own clinical practice? Can you give an example of a scenario in which you use it?

Not only have we used it as an entry for several randomized trials, use it locally on a daily basis in both the prehospital and ED setting to activate our MTP. The recent data on time to activation, product delivery, and its effect on outcome has led us to place these products closer and closer to the patient. We now have not only RBCs and plasma on all our helicopters and in the trauma bay, but we have recently added whole blood to each of these areas to bring products quicker to the patient while we are waiting for delivery of the formal MTP coolers.

Bryan Cotton, MD, MPH, is a professor in the department of surgery, division of acute care surgery at the University of Texas Health Center in Houston. He is an active researcher in the field of trauma and traumatic injury.