Predicts recurrence for colorectal cancer patients with liver metastasis after hepatic resection.
When to Use
Pearls/Pitfalls
Why Use

Patients with hepatic metastases from colorectal cancer without evidence of extrahepatic disease.

Other Potential Use Cases

Points to Keep in Mind 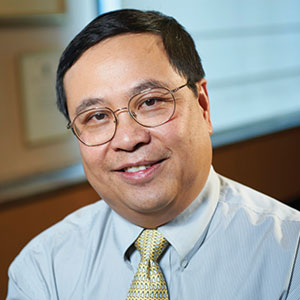 Why and how did you develop the Clinical Risk Score?
The way cancer is classified, all colorectal cancer patients with liver metastases are stage 4. But patients with a single liver met are still curable; they should be stage 3b. AJCC [American Joint Committee on Cancer] wouldn’t listen to me, so I developed the Clinical Risk Score to stratify these patients. We identified all the things that might be prognostic, and it turned out seven things were. The two that dropped out when we formulated the score were margin positivity, since nobody would ever go to the operating room expecting a positive margin, and the second was someone who has extrahepatic disease. Since those things are relative contraindications to surgery, we took the other five parameters, and at first we tried modeling with all sorts of fancy numbers and percentages, and it turned out if we just assigned one point to each criterion and then just added them up as a total score, it actually works pretty well.

Do you know of any instances where people misapply the score or use it in the wrong patient?
The biggest worry is that somebody who calculates it out and says, “Oh, score of 5! Everything bad!” Well, even those patients can have up to 20% five-year survival, and nothing short of having a resection allows that. So I always say, don’t use it to exclude people for resection, but certainly at high risk scores, those patients should probably be on a chemotherapy regimen to help with the outcome.

Is there anything you would change about the score, given recent changes in medicine?
Every five or ten years I get a call from someone who’s trying to improve on it. Many times they will say they tried and tried and couldn’t improve on it. Some of the things that people have tried are some molecular test that would trump this, or some response to chemotherapy that would trump this. And yeah, it might help it a little bit more, but the 5 points have become very practical. It is useful around the world, and that’s because these are data that everyone taking care of colorectal cancer worldwide would have, versus if you said, “Oh, is there a BRAF mutation?” Well, not every center runs BRAF mutations, and certainly not in the emerging world, so comparing results and using them becomes very difficult.

It turns out it’s very practical. There are many many papers now that say Fong Score, and I’m honored, but I was just trying to make a practical tool to help with stratifying patients for risk and for adjuvant therapy and for comparison of clinical outcome.

Do you have any thoughts on similar risk scores, like Nordlinger and Nagashima?
They’re similar, but different—for example, Bernard [Nordlinger]’s score, was a multicenter grouping, and many of their centers that they entered didn’t have patients with many tumors. That’s slightly different. The Nordlinger score is certainly useful, but people have found that five things makes it easier because you can always count on one hand. I still remember coming off the podium at American Surgical where I presented this, and I think it was John Cameron who came up and said, “You know, it was very clever to have five points, because then you can just count them off on rounds [laughs].” But I didn’t think of that—I just ended up with five.

We at one point also tried to use the score for clinical trials. We said we’re entering patients for a trial on colorectal cancer metastatic to the liver. But think about how heterogeneous that group is. We only stratify according to one tumor versus not one tumor, so you’re probably gonna segregate people, but not well enough to really make sure that there’s equivalent sample groups. So that’s why at one point we were also pushing it pretty hard as a way of randomizing patients in clinical trials.

In your own practice, how do you use the score and survival values to counsel your patients?
Well, I use less of it directly with patients. Patients don’t care about scores. They care about, “What is MY risk for recurrence?”, so I actually calculate it out and then say to them what it is. For fellows and residents, though, the score is a very useful tool. They know when they present to me, “This is a 42 year old male patient with no family or genetic history predisposing to cancer who now presents with these five criteria,” they just go through the criteria and give me a score. Then we know exactly where we stand. In a single sentence or two sentences, we know exactly the risk level, and if I know what treatments they’ve had, we can then decide what to do for the patient.

Yuman Fong, MD, is the Sangiacomo Chair in Surgical Oncology, Chair of the Department of Surgery at the City of Hope Hospital and former Murray Brennan Chair in Surgery at Memorial Sloan-Kettering Cancer Center. He is an expert in hepatobiliary cancers and is leading the research effort to employ genetically modified viruses to destroy cancer cells.

Are you Dr. Yuman Fong? Send us a message to review your photo and bio, and find out how to submit Creator Insights!
MDCalc loves calculator creators – researchers who, through intelligent and often complex methods, discover tools that describe scientific facts that can then be applied in practice. These are real scientific discoveries about the nature of the human body, which can be invaluable to physicians taking care of patients.
Content Contributors
Reviewed By
Related Calcs
Have feedback about this calculator?